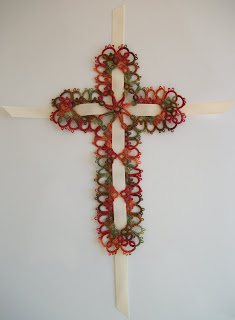 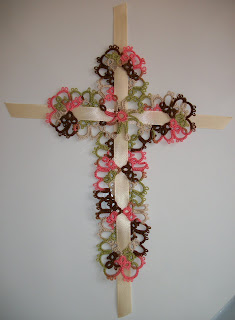 Wow where has the time gone? I can't believe it has been this long since my last post! A Lot has gone on in my life since then.. #1 event was becoming a dislocated worker after working for 16 years at Wilbert Plastic Services which closed July 16Th! So now not only I have become a national statistic, but I am a newbie at writing a resume and all of these apps are now done online... All new to me! As for tatting though, the summer months are always fun filled with so many outdoor activities so not much time for tatting. These past 3 weeks I have tatted more than in the last 5 months. I demonstrated at our Conservation Center for their Heritage Days. This year it was extra special because my 7 yr old daughter came along with me and demonstrated "Finger Knitting". That was a big hit with the girls! We had girls lined up to try this out. Markeia had so much fun doing this. When being a demonstrator there, they ask for a donated item in your art for their fundraising charity auction. This year I shuttle tatted the 8 Point Bag, out of the "It's in the Bag" book. I tatted it in size 20 Lizbeth thread.

A couple other projects I have been working on and just finished up this morning, was a couple of very special crosses. The story behind the cross pattern in it's self is a tear jerker. While tatting these crosses, it was a constant tug on my heart strings. The pattern is a Grandma Pearl original. Before her passing she was trying to finish one for all of her grandchildren and great grandchildren. She almost accomplished it. She had 2 in progress and one to start yet. Being it was her own pattern - she did not have it written down. So being that I was the one and only she taught to tat, my father-in-law asked me if I could complete her project and finish up what she had started. I sat down and looked at one of her completed crosses and wrote out the stitch count. I can't begin to describe the honor it was to hold her shuttle and work in my hands and continue on with her cross. After several hours of tatting and several tears shed, I finished up her project in time to pass out the crosses after her services. Now that was 9 years ago. I feel that she wanted me to learn the art of tatting from her it was a sign of more. I still continue to past her beautiful gifts onto all the new great and also now great great grandchildren. I try to have a "Grandma Pearl Cross" ready for them as a baptism gift or shortly after.. So this morning I just finished up two crosses for a couple very special little girls. They are for my (step) granddaughters, which would be Grandma Pearl's Great Great Granddaughters. I tatted these with the love from the heart as Grandma Pearl would have also. :) So here they are... The 1st is for Kaylse, it was tatted in Lizbeth size 20 Mountain Breeze. The 2nd is for Ella, it was tatted in Autumn Spice (I love love love this color!) Lizbeth size 20.

So I'm closing for now.. thanks for letting me share!
Posted by Tatncrazee at 7:56 AM

Tatncrazee
I am happily married for 20 years to Mark. I am a mom to a 7 1/2 year old girl, Markeia. I have been shuttle tatting for 14 years. My husband's Grandmother Pearl taught me and I have been an addict ever since. ;-) I so miss tatting and chatting with her on the front porch on Sunday afternoons..